Say Hello To His Little Friend.

Huck has a friend.  His friend is mostly nameless — unless you count “Huck’s Friend” as a name.

It started about a month ago.  I was home a little later than usual because I had a doctor’s appointment and I had let Huck outside.  When I looked out the window to check on him — he was chasing what appeared to be a chipmunk.  And he was really chasing him!  I ran out there to save the poor, little thing when I realized it wasn’t a chipmunk at all — it was another dog.  In my fenced-in backyard.

This dog was a little chihuahua with a collar.  (And it was chipmunk-colored.) 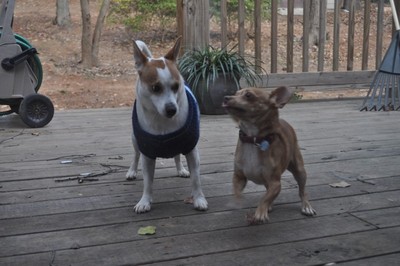 Very cute, very energetic.  I tried to read his tag but he was way too wiggly for me to be able to tell where he belonged.  Then I put him outside the gate.  And then he proceeded to show me just how ridiculous that was by wiggling his way in between the slats on our deck and entering the backyard again.  And Huck was happy.

So I just let them play — figuring he’s got a collar so surely he’s not gross or anything.  And they played and wrestled and chased and had a grand old time.  And then Huck’s friend just left on his own. And my Huck came back inside — happy and exhausted.

The next day, while getting ready to eat my breakfast, I heard a bark outside.  And Huck jumped down off the couch and ran to the back door.  And sure enough, there was Huck’s Friend.  Waiting on the other side of the door.  So I let Huck out and they played. 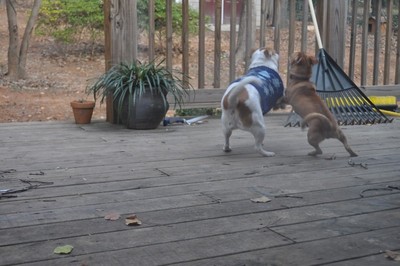 And this has gone on every day since.

We’re pretty sure Huck’s Friend lives two doors down.  We’ve never talked to them or anything, but the pup does seem to run in that direction after visiting us.

It’s the cutest thing I’ve ever seen.  For the first time in a month, we haven’t seen Huck’s friend for a couple days.  I’m assuming that’s because of the snow and ice we’ve had and this little dog is super tiny and hardly has a coat!  So hopefully his nice parents are keeping him in right now.  But I hope it warms up a little bit soon so my baby can play with his friend! 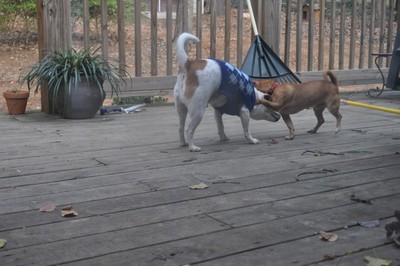 This entry was posted in Huck. Bookmark the permalink.