I started back to work on Friday which means that Tom started going to his daycare on Friday.  The teachers told me he had a really good day and I was so happy about it I burst into tears.  (I really did burst into tears when I picked him up Friday.  It was actually kind of embarrassing.)

I’ve switched shifts at work so I go to work from 5:30 a.m. until 2:30 p.m. so that I can be with him in the afternoons and we still get to do our walks and read books and do the bedtime routine.  This also means that my husband is the one who gets him ready in the mornings and takes him to daycare around 9:30 a.m.

I make all of Tom’s bottles for him before I leave for work.  I also set out Tom’s outfit so Kevin doesn’t have to pick one out or anything.  (The real reason is that I totally don’t trust Kevin…)

So Sunday night, I picked out a Monday outfit for Tom.  I think it says “warm, muggy, very rainy day” in a very adorable way. 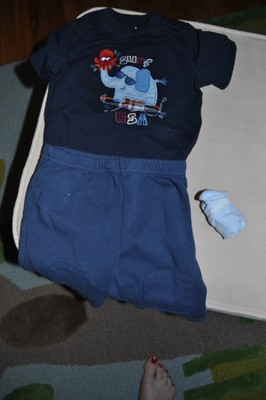 School outfit complete with matching socks.  I am OOC.  (out of control)

So Monday afternoon, I walked into Tom’s classroom looking for my man dressed in blue.  But instead…Tom was wearing his pajamas from the night before and a pair of gym shorts I had never seen before. 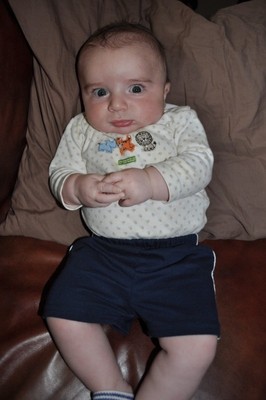 So I picked him up and we went about our afternoon and I just assumed that Kevin must’ve overslept and decided to leave Tom in his pajamas and then he somehow found a pair of baby gym shorts that I just didn’t remember.

You know what they say about people who assume.

Kevin called me around 4 p.m. to check in and see how Tom did at school.  So I gave him the report (he’s a genius and knows the square root of pi) and then I asked him if he was running late this morning.

Me:  “Well, it’s just that he was wearing his pajamas from last night.”

Kevin:  (silence)  “Oh.  I just didn’t think about it.  I changed his diaper and thought he looked good.”

Me:  “Then where did he get these mystery gym shorts he’s wearing?”

That’s right.  My husband sent my child to school with no pants!  And somehow my child got a stranger baby’s pants!  Which I think just proves how much my baby is learning at school:  If you don’t have pants, steal someone else’s.  It’s a valuable lesson to learn.

Now there’s some other baby out there wondering why he has no pants.

My baby, on the other hand, is feeling sporty.

2 Responses to No Pants, Stranger Pants.