Putting The Waaaaaaaaa In Pool.

This weekend was a big weekend for Tom. First, we worked on getting him to sleep in his crib and there were a lot of tears shed in the process.  So we decided to cheer him up by buying him a baby pool and letting him beat the heat and work on becoming the next Michael Phelps.  (Minus the pot smoking.  For now.)

Plus, Kevin really wanted one of the hard plastic baby pools from the good old days.  I’m actually unclear as to why, but rest assured, he really wanted it.

Anyway, they don’t sell those hard plastic baby pools at any of the stores near us, so we went to PetSmart and bought one for a dog.  It has a sticker that clearly says “Do not use for children” on it.  We are rebels/bad parents.

So we put the dog pool on the deck, put a little water in it, I put Tom in his little suit and we ventured out so Tom could enjoy his prize for being such a good sleeper. 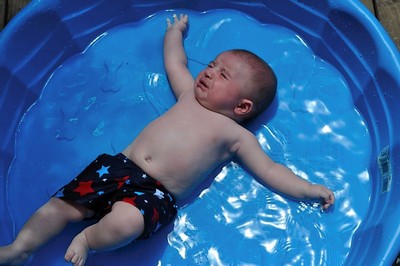 Don’t you love it when your prize for your child goes over so swimmingly?  (I know, I know.  I couldn’t help it.) 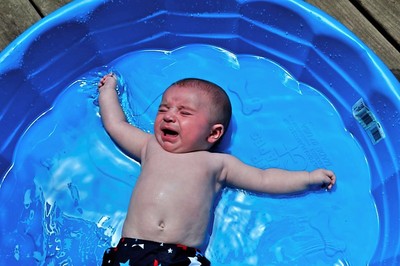 I can’t be positive, but I think he’s saying something along the lines of, “WHY DO YOU HATE ME SO MUCH?!”  Or maybe, “I am NOT a dog!” 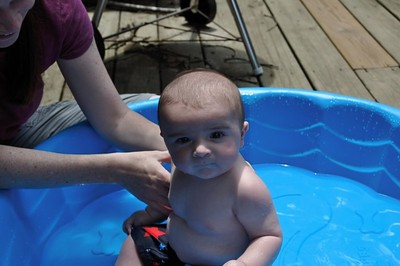