Last week was a week of firsts for Tom.  Sleeping in the crib, hating the pool and also learning to eat from a spoon.

Here’s the thing — Kevin totally started this “first” without me.  A monumental first!

But it was because I was out watching Sex and the City 2 with Robyn — my first real outing post-baby and I had to pay for it by missing his first spoon-fed meal.  I think it was a fair trade.

(Kevin did say to me later, “Are you sad I fed him without you here?” and I said “No, it’s totally fine.” And it really is. I just like giving him a hard time.)

But the second spoon-fed meal, I totally caught on camera.  Yay Mom! 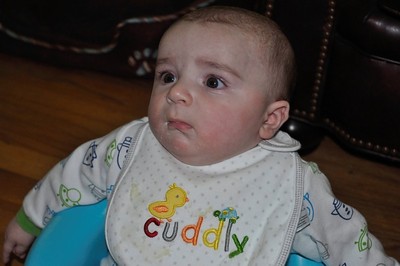 Tom has really taken well to eating his rice cereal from a spoon.  My child?  Likes eating?  What?!

Of course he does.

I fed him when we got home every day last week and I’m telling you — Tom is like a baby bird with his mouth all open just waiting for me to pop something in there.  And then 50% of the time he spits it out at me.  But he has no problem with me scooping it up off his chin and putting it back in there.  Gross.  He loves it. 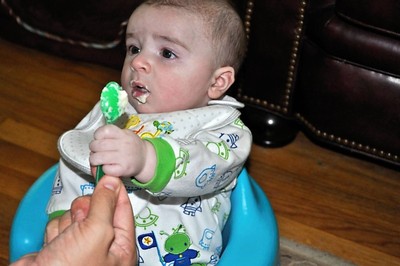 You know who else loves that Tom has started eating/spitting his food?  Yes.  That would be one Mr. Huckleberry Phinneas. 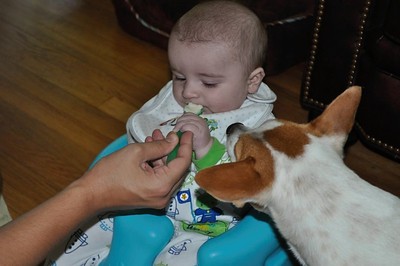 When I say “Huuuuck” in my warning voice, he looks at me with his big brown eyes as if to say, “I’m just giving my brother some kisses, Mom. Geez.”

(Admission:  I put Tom’s Bumbo on a table.  I know it’s against the rules and at any moment he’s going to launch himself off of it.  I am prepared to block this launching with my body and that’s how I validate it.  First the dog pool and now this.  Please don’t call DFACS on me.)

All in all, it’s going really well.  I think it probably is helping him sleep longer at night too — he’s been doing at least one 9-hour stretch every night this week!  Not sure if it’s the crib or the formula or a combo but it’s pretty great.

My next thing to work on is getting him to sleep in his crib for naps.  He’s doing great at nighttime, but I think he thinks I’m trying to put him down for night sleeping really early and he’s pitching major fits about it.  I’ve been letting him sleep wherever for naps as a result.  Baby steps.