How It All Began.

Thinking about that also got me thinking about how it all began.  I read quite a few blogs and almost all of them have some type of “introduction” link that explains how their blog got started (and because of the blogs I read, it’s usually about how they met their husbands.)  I’ve copied a few of the questions that my fellow bloggers have answered in their intros.  A trip down memory lane so that you’ll know how Tom came about!

How did you and your husband meet?

Kevin and I met in 1995 at Valdosta State University.  His dorm was next to mine.  But I dated someone else for a couple (seven) years and didn’t begin dating Kevin until 2005.  I am hard core when it comes to playing hard to get.

How did you and your husband get together?

Kevin’s best friend is married to one of my best friends and they conspired to set Kev and I up.  It worked.

What did you do for your first date?

First, you must know that my sister said to me that day, “This may be the last first date you ever go on.”  And I believe I said, “Yeah right!”

He picked me up at my near-to-Lenox-Mall Atlanta apartment and drove me the 45 minutes to Gwinnett to take me to a restaurant he just loved – which happened to have been closed when we arrived.  So we went to Bailey’s instead.  Then we tried to go bowling but apparently bowling is extremely popular in Gwinnett and the wait times were hours long.  So we went to Starbucks and then drove around.  It was a very high school first date and I was immediately smitten.

Do you remember what you wore on your first date?

Who said “I love you” first?  When was it said?

He did. I think we’d been dating about 2 months maybe?  Maybe a little less.

When did you begin discussing marriage?

I thought it was soon.  Maybe after three months.  He mentioned it to me on the phone.  I already thought we would probably get married, but I was still shocked when he actually said the words.

How long did you date before getting engaged?  How long were you engaged?

What is your least favorite part about being married?

He’s messy.  And he seems to think every surface in our house wishes it had an almost-empty can of soda on it.

What is your favorite part about being married?

I could talk to Kevin forever.  He’s super interesting.  He’s really smart and really funny and really laid back.  He puts up with my craziness.  He’s a great husband.  I think everyone should hope to marry someone like Kev.  (Too bad they can’t.) 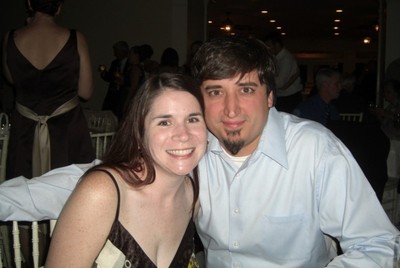 This entry was posted in Family, Kevin. Bookmark the permalink.