My baby likes a vegetable?

Yes, it’s true.  Even though my diet while pregnant included quite a bit of chocolate and more than my fair share of bagels — he likes squash anyway.

We started him with squash this past weekend.  I put the first spoonful in his mouth and he made a bit of a face at first.  I believe his look said something like, “Uhhh…this isn’t rice cereal.”  But then he ate it anyway.  And before I knew it, he was baby birding me again.  Just opening his mouth right up hoping his mama bird would shovel some squash in there. 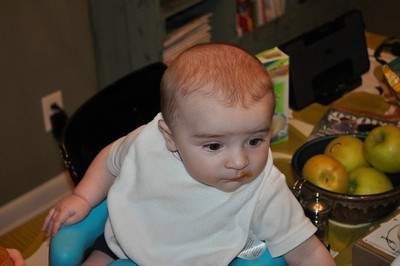 This pic was obviously taken right after his very first bite.  You can tell because he’s still somewhat clean. 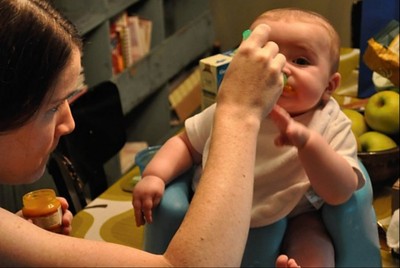 Me concentrating.  Him not concentrating.  (I asked Kevin to please take pictures that make it look like our dining room table is clean, but apparently he’s not a magician.  So disappointing…)

The only thing that’s a bit of a challenge really is that he just loves being up on the table.  It’s a whole new viewpoint for him and he can’t get enough of it!  He is constantly twisting and turning in his Bumbo so he can really understand what all that junk on our table is.  (I keep telling him that our mail really isn’t that interesting but he isn’t buying it.) 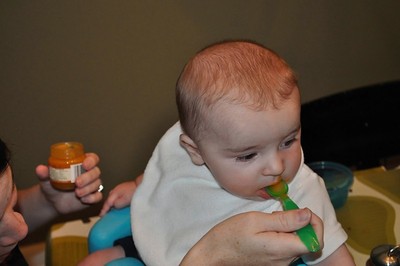 But he really is all about eating his baby food so far and I’m thrilled about that.  My sister had a bit of a hard time getting Matilda to eat baby food in the beginning, and because of that I was very cautious.  Rachel was really a more health-conscience pregnant eater than I, which I think just proves that if you drown a baby in chocolate and bagels while pregnant, they will pretty much seek out whatever else you give them once they’re out. 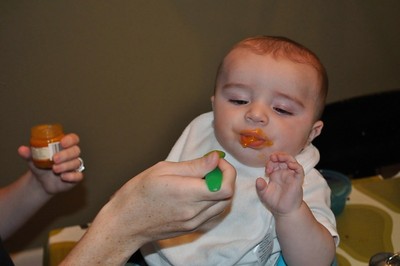 He looks like he’s trying to get away from it doesn’t he?  He’s not.  He’s just trying to see if he can hit my hand and make me spill it all over myself.  He can.

Next stop was homemade organic peas!  Kev made them for Tom and after four days of squash, we tried the peas.  Again, a face in the beginning that said, “Uhhh…this isn’t squash.” And then he just chugged them.  His Daddy was thrilled. 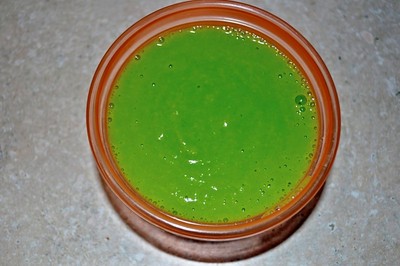 I’ve finally figured out how they made the slime for “You Can’t Do That On Television.”  It’s peas.