There are a couple of things we can sort of count on (for now) when it comes to Tom’s sleeping.

So last night, I was getting Tom ready for bed.  Yesterday, he missed a nap, so around 6 p.m. he was winding down in a big way.  I’d given him his bath and I was making him a small bottle when Huck started barking like a dog possessed.  That bark only means one thing:  Someone is coming to the house.  (Or Kevin’s grandmother is visiting us, but that’s another story.)

Doorbell rings and it’s a guy identifying himself as being with ADT — our home alarm company.  He was there to test our system, as requested by my husband.

Now, Kevin had told me that ADT would be coming by, but he said they were coming Wednesday at 5 p.m. (when he came home early to meet with them) and he said they just needed to “switch something on.”

As it is, it’s Thursday, my baby is half asleep, my dog is going nutso, I look like I’ve been through one of those workout boot camps and my house is a total wreck.  Not that I need the house to be immaculate for a service person, but the poor guy ran into a baby toy that began going off and when he tried to get away from it he hit another toy that began playing Mozart.  Welcome to my world, ADT.

I called Kevin and asked him to please come home.

Now, if there hadn’t been a stranger in my house, I would’ve put Tom to bed right then.  His eyes were seriously closing and as part of our Ferber sleeping method, we are supposed to stick to our nighttime routine and put Tom in his crib before he falls asleep.

But since there was a stranger in my house, I just kept holding Tom and tried to keep him awake.  Which just made him really, really, really mad.

After 20 minutes of awkwardness with a pissed off baby and a stranger man, Kevin got home.

Yes, that’s right.  This was not a “switch something on” visit.  This was a “we need to test all of your alarms so there will be INSANELY LOUD ALARMS going off for the next 30 minutes but not until you finish this paperwork” visit.

So now my baby is completely asleep on me.  And now I am holding him while outside in 95 degree heat so that the alarms won’t wake him.  And now I’m thinking of ways to kill Kevin.

After about 20 minutes of alarms, Kevin says we can come in because the alarm-testing part is over.

So I take Tom to his room, put him in his crib, sing him a song and then:  BBBBBEEEEEEPPPPP!!!!!!

Tom is now awake and he is mighty mad.  Kevin runs in there and says, “I’m so sorry!” and for a second, I have pity on him.

So we’re awake and I just accept it and hang with Tom in the living room.  And after ADT finally leaves sometime after 7 p.m. (Which, by the way, he even gave me a very pitiful “Sorry” before he left.) Kevin explained that he had no idea they would be testing the alarms.

Thomas eventually fell asleep at about 8:45.  And 15 minutes later I was asleep too.  The bright side?

These boys are really cute.  And our entire family can vouch for the fact our alarm system is in working order. 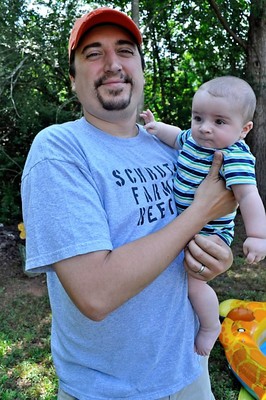