Is This Jealousy Poo?

Tom’s big brother seems to be acting out this week.  I don’t really get it.  Now, I know he was an only child before Tom and I know things have changed around here since Tom’s birth, but Kev and I have made a really big effort to not only include him in everything so he wouldn’t be jealous, but to still spend one on one time with him so he wouldn’t feel left out.

And still — for the first time in his life — he has begun pooping in the house. 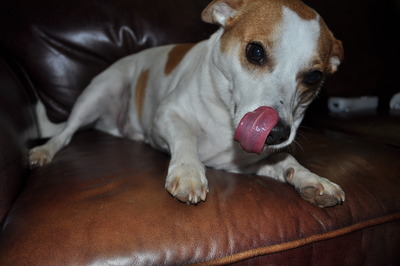 That’s a guilty face.  With tongue.

Because we’ve always been able to completely trust Huck, he has free run of the house while we’re at work.  Now, he is  now only in the house 4-5 hours by himself a day.  Before Tom, he was here around 7 or 8 hours by himself.  So really…his conditions have improved.  Basically, it cancels out the “he can’t hold it” excuse.

Kevin came home early on Tuesday to meet the dry-out-the-basement-guy at the house, so he got here around 1 p.m.  That meant Huck had only been home alone for 3 hours.  And he had pooed in our upstairs bathroom.  (Which happens to be carpeted.  Which happens to be something we intend on changing because…it’s weird.)  Anyway,  Kev was shocked and disappointed.

We’ve always read that if you don’t catch them in the act, it does no good to punish them because they don’t know why you’re mad.  So Kevin cleaned it up, although he said he thought Huck knew he’d done something wrong.

Yesterday, Huck pooed downstairs in the room next to where Kevin was — when Kevin was still home!  What the?!  That time, Huck did get yelled at.  And Kev felt bad about it, but was confident that it would do the trick.

So last night, Kev made Huck stay up and go outside for an extra potty break before bed.  And he made Huck stay outside from the moment they got up this morning until he left for work (about 2 hours.)  And he closed off the downstairs (which is carpeted), the bathroom upstairs and Tom’s room.  And when I got home today — he had pooed on a towel.

I feel like I must assume he’s acting out.  But I have no idea why!  I don’t know what we could do to make things better for Huck.  We all go on walks together.  Huck and Kev play outside just the two of them at night.  Huck is hanging out with me right now while I’m typing and Tom is screaming.  (Tom thinks he doesn’t want to go to sleep, but I think he does.  It’s a standoff.)

I really feel like we’ve made such a conscience effort to include Huckle and play with him and love on him so he knows we still love him.  And still — there’s poo.

I think we’re going to have to start putting him in one room of our house for awhile like we did when he was a teeney little puppy.  At least that way, we won’t have to go on this icky version of an Easter egg hunt everyday.

Has this happened to anyone before?  Any advice on what we can do to make Huck not want to poo at us?

This entry was posted in Huck, Motherhood, Tom. Bookmark the permalink.