Tom had a semi-rough night Thursday, which I assumed was because he had a bit of a cold.  Friday night was a lot worse.  And Saturday morning he had a fever.  And his mom was freaking out wondering if this new sickness had anything to do with his previous medical issues.

But I married a smart man who said, “Maybe he’s teething.”

Kev and I have believed that Tom has been teething for a couple months now — but no teeth ever popped out.  He chomps on his hand a lot.  He drools a lot.  He has had a couple of fevers that have seemingly no other symptoms.

But all of those things can be explained away.  Apparently, drooly fevers just mean you are a baby.

So now that a tooth was finally trying to make an appearance, it wasn’t the first thing that occurred to me.

I rubbed my finger over his gums — which, by the way, Tom really doesn’t like me to do.  Something about, “These are my gums!”  and “Mom, my gums hurt a lot so stop touching them!” and whatevercakes.

Anyway.  I felt the sharpness of a tooth on his bottom front gum.

I was so excited!  Seriously.  I was happy about this development.  I called family members to brag!  I was thrilled he was getting a tooth!

Because I am obviously someone who has never been in the presence of a teething child.

By Saturday night, I felt like I might die because only a short six months after I’d survived Tom’s newborn-ness, I had a newborn once again. Poor little guy was hardly sleeping and when he was awake (always) he was producing some sort of crying noise.

I held him almost constantly.  I let him sleep on me.  Sometimes when he was awake and sitting on my lap, he would suddenly burst into tears.  The rest of the time he had kind of a moan/groan going on.

It was so terribly sad! 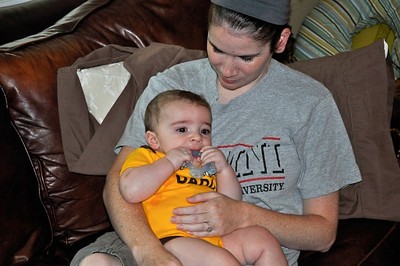 I felt awful physically because I wasn’t sleeping.  I felt awful for my baby because he was obviously in pain and I could not fix it.  That’s the worst feeling ever.  It felt like hospital trauma all over again.

Sunday was a little worse. So bad.  By then, I’d bought every teething item ever invented.  I am now the proud owner of three frozen teething rings, baby orajel, tylenol and frozen carrots.

On top of that, Tom stopped eating on Sunday.  That sent me into a whole new mommy panic.  I started to worry that maybe I was just passing off his fever and crankiness for teething, but what if he had some deadly disease?!

(My mom in sister assured me that Tom would eat eventually and that I was simply insane.  Whew!)

By 9:30 p.m. Sunday I was so tired that I was running into walls (true story) and then crying about it (also true.)

Kevin put Tom to bed around 10:30 p.m. — and he went to sleep.  Finally, finally.  Apparently my baby can sleep through the pain of teething if he doesn’t sleep for the three days preceding it.

He slept until 7 a.m. on Monday and woke up in a baby haze.   Awwww…sweet thing.

In the days since, he has seemed like he is feeling better. The tooth still hasn’t popped all the way out, but he has most of his appetite back, he’s sleeping better and he doesn’t have a fever anymore.

For me, though, this teething experience made me feel like all of a sudden I didn’t know what I was doing — again.  I felt like I was always five steps behind figuring out what was going on and how to fix it.  I waited too long to tell Kevin that I really needed to sleep for a few hours. (I don’t think he realized how long I’d gone without it.)

Finally I talked to my husband and I called my sister and said, “I’m having a mommy breakdown and I need help.”  To which Rachel said, “You are a wonderful mother and are doing a great job.”

I think I knew that my journey as Tom’s mom would be a constant learning experience — but I didn’t really get how much so.  And if you know me, you know I have always hated learning.  (I love knowing, though!)  But what I have really learned is that I will be learning, learning, learning always.

And I better get used to it.