Learning To Make My Own Rules.

I break some rules — I’m not a saint or anything.  I speed when driving.  I’ve been known to eat raw cookie dough.    I’ve stolen a snickers.  (gasp!)  No seriously, I’ve done some rule breaking, but as a general rule, I follow the rules.

And that’s difficult to do when you’re a mother.

Because there are no rules.  And there are so many rules.

Well, everyone has an opinion.  And there are like 15 million gazillion books out there to tell you how to do every single thing that you could possibly need to teach a baby and keep a baby alive.  So in that vein, there are lots of rules.

It’s taken me awhile to realize this.  My first instinct was to follow rules, of course.   So I followed the rules (mostly) when it came to teaching Tom how to go to sleep at night using the Ferber method.  And even the Ferber method tells you that all bets are off when your child is sick or teething or anything like that — so that was the method I thought we could handle.  And it has mostly worked for us.  Enough so that if someone asked me, I’d recommend it.

But.  There are still nights when I rock him to sleep.  Why?  I l-o-v-e rocking him to sleep.  I feel like it’s my mommy paycheck.  And lately I’ve been cashing it in every other night.

Dr. Ferber would totally point at me and say “rule breaker!”  I just know it.

When we were in the hospital with Thomas during his internal bleeding episode — that was a truly eye-opening experience into making our own rules.  In a major way, we had to make some hefty decisions.  And after he’d had a 3 hour scan that had required him to be strapped down, and after he’d had the surgery and they didn’t find anything, the surgeon came in and told us that they might want to do another one of the strapped-down scans.  And I looked at Kevin.  And he looked at me.  And I knew we would totally not be doing that.

And maybe I’d been making decisions that weren’t exactly following rules for awhile, but that was the first time I felt like — yeah, that’s not good for my baby.

So yesterday we had to go back to the pediatric GI doctor, who had been a part of Tom’s surgery, for a follow-up.  It was our last appointment from Tom’s whole ordeal and I was really looking forward to getting it over with.  We have had no problems since the hospitalization, so basically this was just the last check off on our list.  When they discharged us, they told us to make the appointment.  And I dutifully did.

Because I decided an hour and 45 minutes is too long for me to wait with my 6-month-old so the doctor who couldn’t find out what was wrong with him in the first place could see that my child was still okay.  And Tom needed a nap.

Even though I’m now the one making them, technically I’m still a nerdy rule follower.  Which is okay by me. 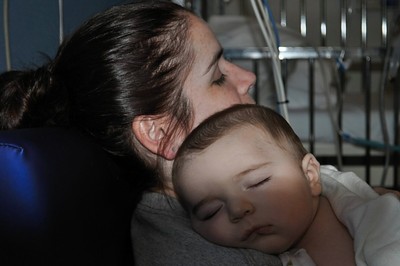