Then on Friday, it seemed more outey.  So I called my sister and asked her if it was normal. She said she thought so.  So then I laughed at how I freak out at every little thing and decided I would have to write a blog about my nuttiness.

Then Sunday, I thought it looked really weird.  And it squished when I pressed it.  And I thought, “Oh my God!  I need to rush him to the ER!  (pause)  Probably!”

I decided to take control.  I Googled:  Belly button baby out squish.

And Google told me it was an umbilical hernia.

That seemed correct to me.  The pictures looked like Tom’s.  (And some looked way, way worse than Tom’s.  Gross, Google.)

I was still a little bothered, though, because when Tom had his surgery in July, one of his incisions was in his belly button.  But Tom wasn’t acting any differently at all — he was eating, sleeping and acting the same.

So I called my doctor friend, Quyen.  She’s in Kansas and couldn’t see Tom, but she did feel that it probably was an umbilical hernia.  She told me I didn’t need to go to the ER as long as he wasn’t sick and it wasn’t discolored, but to make an appointment with my doctor so they could check it.

I called Monday morning as soon as they opened and made an appointment for 2:30.

We saw the same doctor we saw when we first came in for the internal bleeding episode.  We’ll call him Dr. Strauss.  Because that is his name.

Poor Dr. Strauss.  This makes the second time he’s seen us.  The first time he said he had no idea what was going on with Tom.  He was basically bothered because there was an obvious physical problem, but Tom was happy and active and was acting like nothing was wrong.  He called the other doctors in to our room to make sure they agreed we were weird.  They did.  And then they sent us to the hospital.  And we lived there for a week.

This time.  Well, this time was a lot like last time in a lot of ways.

The first thing was he said — again — that it didn’t make sense.  Although he agreed Tom had an umbilical hernia, he felt like Tom’s was discolored.  It’s bluish.

But basically, discolored is supposed to be what alerts you that there are issues.  You should see that and then realize that maybe the reason Tom was upset, fussy, had a fever, was sick — was because of the bluish.

Thus the confusion for Dr. Strauss.

So he called another doctor in there to see what she thought.  She agreed that it was weird.  And then she said the exact same sentence I heard 8 weeks ago.

So they called our pediatric surgeon and made an appointment with him.  For Thursday.  They debated sending us back to the ER but ultimately felt like if he wasn’t acting like something was wrong, we were okay for now.  The surgeon will make the call whether we need surgery or not.

I’m supposed to keep an eye on it.  Ummm…yeah.  If they had a belly button video monitor, I’d own it.

My little guy is so happy!  Really, he is.  And apparently his happiness is what confuses the doctors — which I find kind of funny.  Eight weeks ago, they were totally stumped because he was too happy to have any of the things they were thinking he had.  And now, here we are again.

I am thankful in a lot of ways.  If I had to choose, I would rather not know what’s wrong with him and have a baby who feels good.  On the other hand, the past 8 weeks have been hard.  I try really hard to not freak over every little thing.  I really do try to seem normal.  But the truth is, I’m scared every little thing is that other dang shoe.  Dropping.

And it’s scary to not know what’s wrong with your child.  It’s even scarier when the best doctors and surgeons don’t know either.

I am content to know he is seeing the best doctors there are.  I am thankful we live in a big city with a wonderful children’s hospital close by.  I am hoping it is just an umbilical hernia.  I am hoping Tom keeps feeling good.  I am hoping he does not need another surgery.  I am happy my child is happy.  I am hoping that he is just diagnosed with being a weird, happy kid.

That would be perfect. 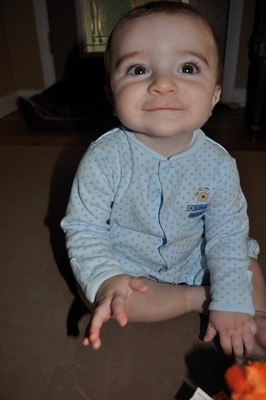