Erma Bombeck once said, “My theory on housework is, if the item doesn’t multiply, smell, catch fire, or block the refrigerator door, let it be. No one else cares. Why should you?”

Before Tom was born, it took me all weekend to do laundry.  And then maybe I’d get around to cleaning one of the bathrooms.  And maybe, on very special occasions, I would have time to dust.

But I couldn’t be expected to do more than that.

Well, you could expect it.

But you’d be disappointed.

Because I had things to do, people to see, drinks to drink, trips to take, parties to attend, shopping to do, activities to participate in that had been created for the sole purpose of getting me out of housework.

And honestly, we really weren’t that dirty.

I mean — we were hardly home.

Most of the time I was just picking up beer bottles that had been strategically placed throughout the house for me to find.

It was like a grown-up version of an Easter egg hunt.

Point being — it took me forever to get just a little bit of housework done.  And most of the time it didn’t get done but I just avoided it by leaving and that seemed to work.

Then I was blessed with the miracle that is Tom.

He averages about three outfits a day.  Even though it seems he has a ton of clothes and pajamas — he doesn’t.  Not really.

And he has a crib sheet.  And a changing table cover.  And burp cloths.  And bibs.

He pukes or poos on all of these.  They need to be washed.  Frequently. 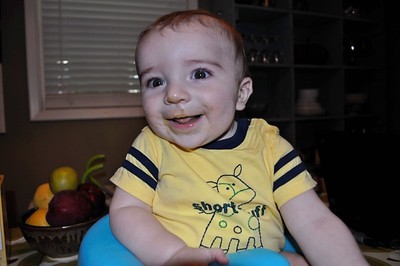 And then there’s his mom.  (Don’t you just love her?!)  Also known as the lady he pukes or poos on.  She also has been known to wipe his messy mouth with her shirt.  And his snotty nose.  And although sometimes she’s been out in public with the smell of spit-up and the shine of snot on her shirt, I can assure you she tries to catch this before leaving the house and therefore, she creates more laundry for herself.

There’s also an adult male in the house (Dirrrrrrty!  I picture this being sung Aguilera-style) and a dog incapable of coming back inside without being covered with mud.

So anyway…I’ve got laundry.

The rest of the house seems to be in on this “Mom is really busy” bandwagon and instead of helping, it’s just gotten worse.

I think part of it is that we’re actually living there now.

I think another part of it is that I actually notice it now.

Because I’ve got mom eye.  (It’s a lot like pink eye, except there’s seemingly no cure.)

I don’t want you to think I’m becoming a clean freak.

I actually was a clean freak once.

Then I met Kevin and he cured me by forcing me to just give up the fight.

So I’m totally not.  I couldn’t be if I tried.  It’s three against one.

But I will tell you, that I can now clean my entire house now in 2 hours.

I can do laundry, put up laundry, dust, sweep, vacuum, mop, do dishes and shove approximately 1,254,723 odds and ends into one of the two closets I have that I’ve deemed “junkable” in just under two hours.

Those closets really help with my time.

I have to kick my entire family out of the house, but I can do it.

I think part of becoming a mother is you are now on fast forward.

But it is such a wonderful feeling to have my entire house clean when my family returns from my imposed exile.  And I think, “I am supermom!!!”  Quietly to myself.

But it’s one of the best feelings.

It feels a lot better than having puke and poo on you.

And a little better than having snot on you.

But then I help dirty it up again by playing with Tom and a bazillion toys on the floor.  And by making Huck chase his toy and get all dirty in the backyard.  And by drinking a beer with Kev on the back porch.

And all of those things are better than my clean house.

At least that’s what I tell myself.

The beer helps me believe it.